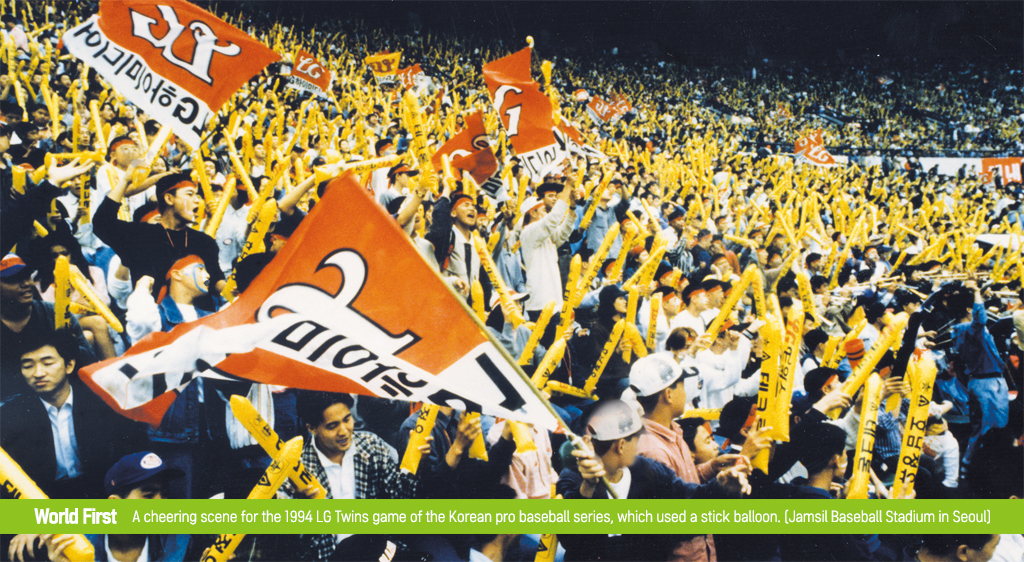 If you strike these two balloons together, it makes an entertaining sound effect 10 times louder than clapping, and you can use them in cheering sports, sales promotions, etc.

We are sure this is a very popular product and hot seller that is gaining huge popularity not only in Korea but also around the world where visual, auditory and advertising effects are needed.

With our brand name, we, BalloonStix Korea has created a new world sports cheering culture.

We will do our utmost best with our sincerity.

- Cheer for athletic competitions and game tools for picnic - creating a fun and exciting atmosphere.

Now,foreign customers also recognize the importance of valve, and they are sending a lot of compliments to our BalloonStix, Made in Korea.

How to inflate and Reuse

BalloonStix has a valve on the top and you can inflate this balloon by blowing air with a straw between these two thin vinyl layers.

This valve will be automatically shut off without any locking device. Very conveniently inflated.

You can refill the air through the valve if deflated due to thin material.

The Background of the BalloonStix Birth, World First

A. In the 1994 Korean Professional Baseball Series, LG Twins used BalloonStix for the first time in the world.

Some said that it was firstly used by the Hanwha Eagles professional baseball team in 1992, but the balloon was not a cheering stick but a long size balloon in 130cm long and 10cm wide made for children's toys that were already popular in Japan and other countries.

It was difficult to use because the balloon was folded in half and encountered each other, so the sound was not that loud, and the balloon exploded easily. You can't call it a cheering stick.

In September 1994, In-yang Kim, then marketing manager of LG Twins Professional Baseball Team and Cheol-ho Kim(CEO of BalloonStix Korea Co., Ltd.) beat each other by cutting the length of the existing 130cm bar to half. It also solved the problem of folding and popping with the effect of much louder sound than clapping.

In October 1994, the cheering stick used in the professional baseball Korean Series became the first 65 centimeters long and the two sticks we know today.

In October of that year, LG Twins became the Korean Series champion.